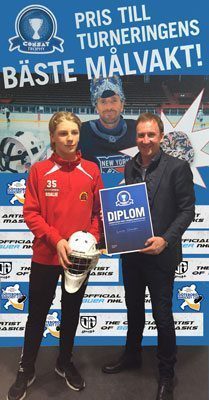 Lucas Olander won Consat Trophy 2016 when Finspångs AIK Hockey Club participated in Gothenburg Icehockey Cup – the world’s biggest tournament for U14. Extra fun was that Lucas and Hugo Ollas from LHC got the same save percentage so it all had to be decided on the number of shots they received during the tournament. It bodes well for the future.

Lucas has continuously been having private training sessions with me and I am proud to contributed to his success.